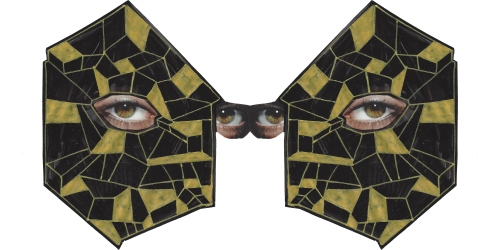 The grid in Jackson’s drawings expand organically in various directions generating a sense of multiple dimensions. Although two dimensional the works tease at sculptural realms and the fourth dimension. The connection between the drawings and the photographic imagery cajoles the work between the ‘real’ and the imaginary.

At a preview event for Crystal Caverns, visitors were invited to curate the layout and certain formats of the exhibition; selecting which works featured, which way up they should be viewed as well as layering some collages that appeared on acetates.

The series was subsequently exhibited at Newcastle’s Laing Gallery in 2015.

Influences in producing the Crystal Caverns series include boredom, thinking about the fourth dimension, Vogue magazine and Alison Knowles’s seminal sculpture/performance ‘The Big Book’. Some people say the publication is a dead art form. The physical showing of these artworks coincided with the final printed edition of  the Independent newspaper  who have moved to producing digital only content.